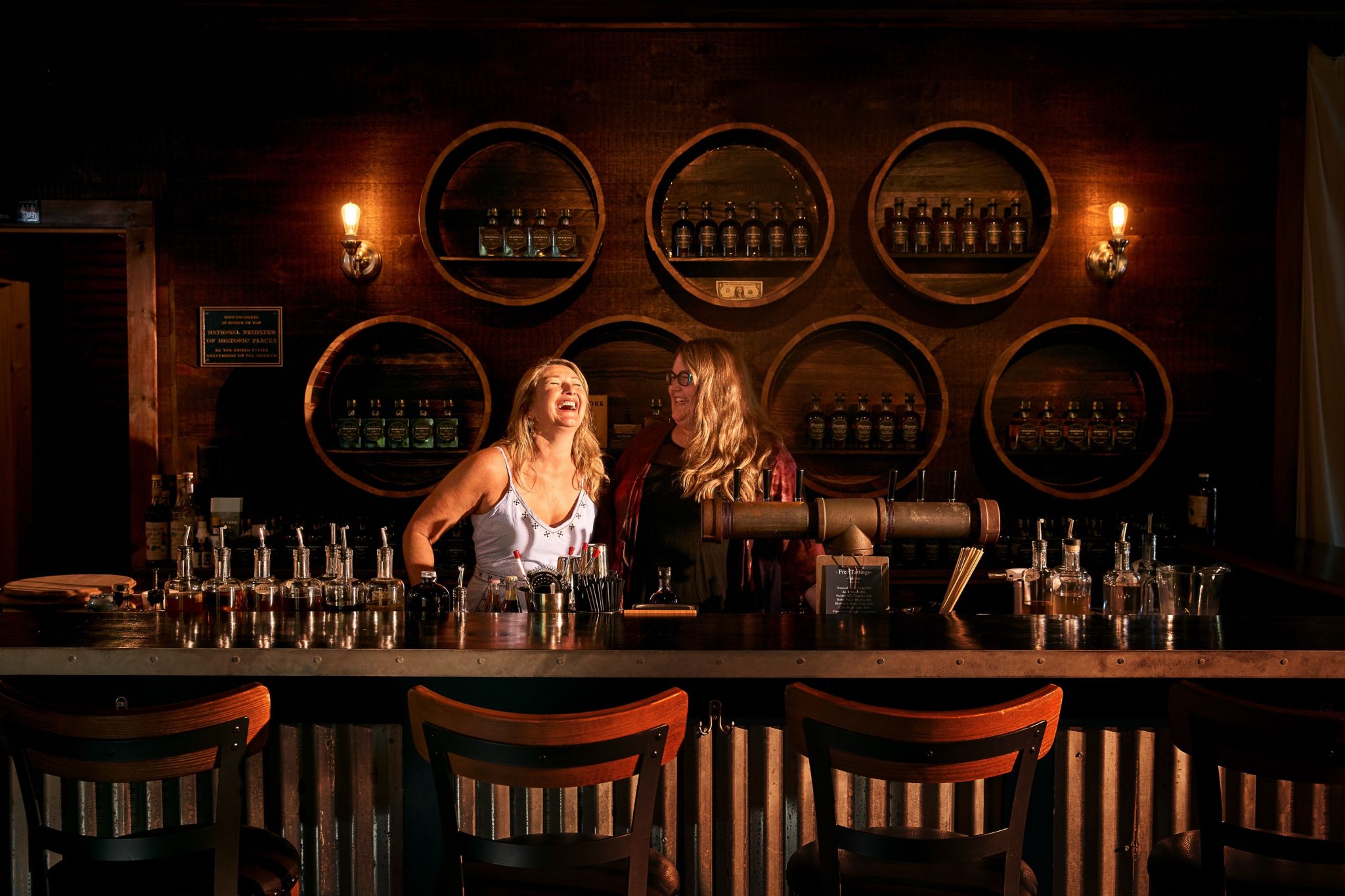 For the Newsome family, there is a distinct recipe for success: a part of guts, two parts of common sense, and a part of blind faith. Ferment it all in a handmade whiskey barrel and you’ve got the women-owned and family-run Cooper’s Daughter Spirits at Olde York Farm.

Opened in 2017 by mother-daughter team Louise and Sophie Newsome – with Stuart Newsome (Louise’s husband, Sophie’s father) and Rory Tice (Sophie’s husband) – the distillery and cooperage are just outside Hudson’s Hill, located on idyllic land along Claverack Creek that belonged (and was operated as a mill) to Jacob Rutsen van Rensselaer, New York Secretary of State in the 1800s.

The family got into distillation almost by accident, mostly out of curiosity and an interest in honoring age-old methods. After just four years, the brand has developed a loyal following for its seasonal spirits in small batches infused with Hudson Valley ingredients, like Black Walnut Bourbon and rose liqueur, and to become one of the few distilleries of the country to manufacture its barrels on site by hand.

â€œDistillation was more of a hobby for me,â€ says Stuart. â€œFarmers always had a still so they could ferment their products and make whiskey at the end of the season. It has always been easier to store whiskey than to store grain or fruit – the making of whiskey was very important to agriculture, and people forget about it.

â€œDuring Prohibition, the police destroyed all stills and it took a long time for distillation to return to farming communities. So this whole thing piqued my interest, and from there it was just about trying to figure out how the process went. “

When Sophie and Rory graduated from SUNY Plattsburgh in 2013, the family, who had lived in Nyack for years, began to pitch the idea of â€‹â€‹buying a property with the intention of opening a distillery. The two young graduates had long experimented with infusions and flavor combinations in their college apartment, and Sophie convinced her parents that the Hudson Valley was the right place to nurture their interests.

The mother-daughter duo worked to get the family dream off the ground, with everyone agreeing that the two retain a controlling stake in the brand. â€œA women-owned distillery is unique and it’s important to share it with people,â€ says Louise, who, like her husband, is from England. â€œYes, this industry is pretty dominated by men, but there are also women who are doing it. “

After a long search for real estate that took them to many farms in the area, the Newsomes made their way to the Rensselaer property – the last stop on their hunt – and knew immediately it was the place, thanks to the idyllic area and the vast buildings already on site. â€œWe wanted to be here,â€ Stuart says of the distillery’s roots in the Hudson Valley. â€œWe wanted to be part of the farming community – we had been coming for several years to visit [Sophie and Rory] and we fell in love with the place. There are so many artisans here, and being surrounded by farms is fantastic because we use local produce as much as possible.

A three-year renovation ensued, allowing Stuart – an entrepreneur for over 40 years – to transform the property’s shed into the perfect place to make spirits in small batches, including a tasting room and heated floors meant to help keep barrels at the right temperature throughout the winter.

In a twist of enchanting fate, the family learned shortly after purchasing the property that Rensselaer had his own distillery and cooperage on the grounds, dating back to 1805. A new family legacy was born.

Keep it in the family

Each member of the Newsome family has their own role in the business, although this has not always been the case. â€œAt first, we didn’t know our routes at all,â€ says Louise. â€œWe were all like bumper cars, we were constantly driving over each other. But in the end, we found our rhythm.

Sophie has mastered the storytelling behind the brand, leading their onsite marketing, tastings and social media presence, as well as imagining unique flavor combinations based on what’s available from their suppliers, all of which are local farms in the region.

â€œI use them as a catalog,â€ Sophie says of her production partners. â€œI kind of go on instinct and create flavors that interest me. For example, we could make strawberry vodka, but there are already a few people doing it. My grandma actually has a thing where she puts black pepper on berry salads, so we’re making a raspberry and black pepper liqueur inspired by that. I love to push the boundaries a bit.

Another big hit with customers is the team’s botanically inspired flavors, made with roses, lilacs and peonies sourced from nearby florists. (â€œThey have a real fan club,â€ Sophie jokes about the popularity of spirits. Customers always call and ask when he comes back.)

Rory is the brand’s self-taught distillery manager, who credits other generous distillers in the region with his acquired knowledge. Although he remains a bit involved in the development process, he is the responsible man when it comes to bringing Sophie’s tasty ideas to life. â€œSophie is good with flavors, but it’s true that she doesn’t do the best with ratios,â€ he laughs. â€œSo that’s where I come in.

Louise leads brand awareness, applying her years of marketing and networking to put the distillery in touch with the right suppliers, organizing trainings and tastings for people like JP Morgan, strengthening the brand’s presence in local markets. and helping to increase production.

If the aforementioned trio are the brains behind the operation, then Stuart is the braun. After transforming the property out of sheer force of will, he set out to make aging casks on site (using American white oak, often from the property or from neighboring farms), an added touch that very few distilleries can claim.

â€œIt was a crazy moment,â€ he says of his debut. â€œI had a little bit of time between the renovation and getting our license and I was like, ‘Why not make a barrel of whiskey?’ It was the hardest thing I have ever done – absolutely brutal. Making barrels requires both strength and finesse, as well as mastering skills such as bending wooden planks or staves and charring wood. The name of the company is actually a nod to Stuart’s craftsmanship – a cooper makes barrels – while capturing the feminine aspect.

Still, the family patriarch reduced his craft to a two-day per barrel deadline and gave the distillery the potential to have an even bigger hand in locating their spirits.

â€œWe have a black walnut plantation on the property, and our friend Rob, who is a chef, told us that you can actually harvest the trees for syrup, just like you can with maple trees,â€ explains Sophie. â€œImmediately I was like, ‘We have to do this’. So we pat the black walnut syrup in one of Dad’s barrels, then we age some bourbon there to make our Black Walnut Bourbon. Spirit has since become their most requested offering, regardless of the season.

Pivot in the pandemic

The chance to win and lose as a family is unique, and the Cooper’s Daughter team have had their fair share of both. â€œEven if you don’t like to talk about it, we fail tremendously,â€ says Rory. â€œGoing from five gallon fermentation batches to 200 gallons – there’s a big learning curve here. You throw away a lot of things, you are often disappointed in yourself, but you keep learning and growing.

The onset of the pandemic posed another hurdle for the crew, prompting them to briefly switch to hand sanitizer production to help their local community. â€œThere was a lot of talk and fear during that time,â€ recalls Sophie, whose pandemic pivot for the company also included cocktails and food at the wheel, followed by an outdoor cocktail garden, which is still in business.

“I was adamant that we weren’t going to change our business to hand sanitizer in the long term, but that we had to. [at the time] because we had the capacity, and people really, really needed it.

The summer of 2021 ushered in renewed optimism for the brand. Louise has set up the distillery with a distributor who will help them grow and satisfy their ever-growing clientele across the country; Stuart supplies companies with his handmade barrels; and Sophie and Rory finally tied the knot, exchanging “I do” on the lot of the property they helped make together. It was an appropriate way to officially welcome Rory to the family – and the company – of which he has long been a part.

â€œMy goal is to keep Cooper’s Daughter Spirits a family business,â€ says Sophie. â€œWhen my parents took the risk and quit their careers to do this with me, we always wanted it to potentially become a generational family business. We are an unfolding story.

Alyssa Longobucco is a freelance writer, editor and passionate about interior design. She lives in the Hudson Valley, where she renovates an 1820s colonial house alongside her husband and son, Liam.

More entrepreneurs and creators in the Hudson Valley