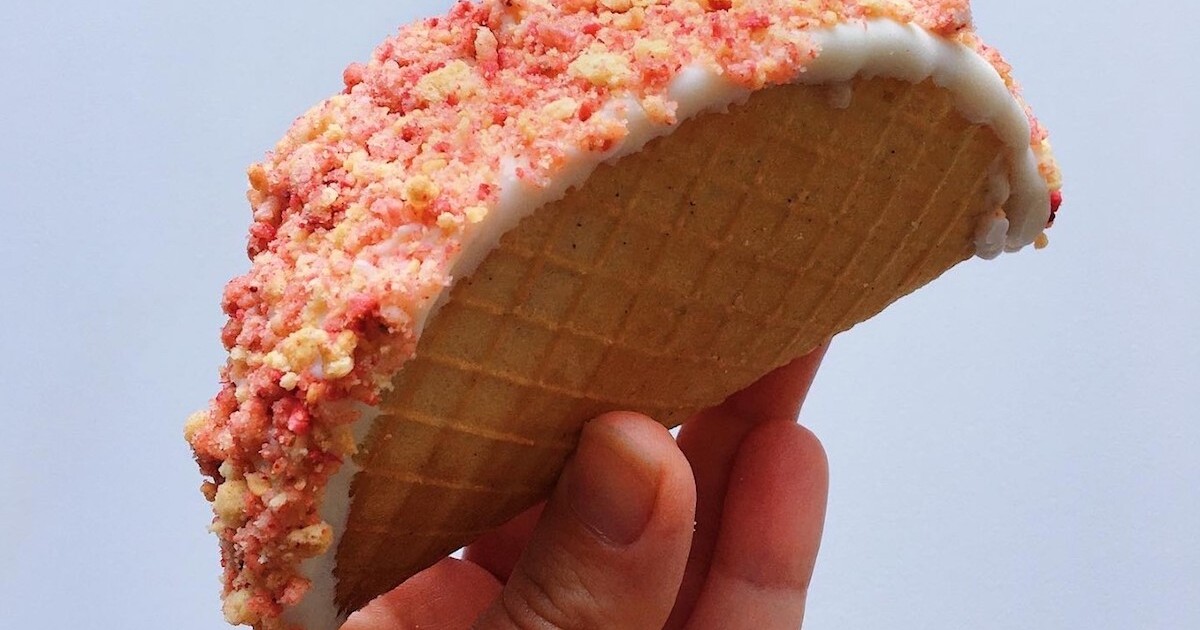 Do you already miss Choco Taco? Here are 3 ways the Angelenos are making it their own

Start your day with LAist

Sign up for the Morning Brief, delivered on weekdays.

As news of Choco Taco’s disappearance broke this week and we began to scroll through the phases of internet heartbreak reserved for a beloved pop culture culinary icon, a theme began to emerge.

Several people involved in LA’s culinary scene had already made their versions of the ice cream novelty. So we have collected them for you. Here are some great options to help you weather the post-Choco Taco blues.

It was the afternoon of July 25 when SueEllen Mancini, owner of Sad Girl Creamery, began to be bombarded with DMs as news of Choco Taco began to spread.

“I had about 15 people email me this article just minutes after it was posted; I was like, okay. All of you, I get it,” she said.

It just so happens that about a month ago, on a whim, Mancini started developing his own version of the Choco Taco using his Latinx background (part Chilean, part Uruguayan) as inspiration for his flavors.

She also showcased some of her catches of the treat at her pop-up stand at Smorgasbord LA, the DTLA weekly food market, for their summer series, Ice cream aisle.

I do not care. I think it’s delicious.

— SueEllen Mancini, on the propensity of creations to get soggy

She also came with the Che taco, a tribute to the slang term used in Argentina and Uruguay. The taco features Argentinian dulce de leche (which Mancini grew up eating with Mary cookies), mixed with vanilla ice cream, the waffle cone and a dark chocolate shell rolled in candied pecan nuts.

Mancini hopes to keep tacos as part of her regular rotation, though she admits making Choco Tacos can be tricky.

In Studio City, Jeff Strauss, owner of Oy Bar, can identify. He experienced a similar event when the news broke. Just two weeks prior, he had also created his own version of a Choco Taco. (Was there something in the air?)

He had chatted with his head chef Kenya Bovey and pastry chef and sous chef Alex Madayag about their memories of the dessert.

We can play with this thing that will make people remember those times from their past.

Bovey remembers skateboarding in Venice and Mar Vista as a kid and stopping at the liquor store to buy Choco Tacos afterwards. Strauss recalled the time he spent eating Choco Tacos after moving to Los Angeles after college to become a film and television screenwriter.

“We got excited and thought – we could do this. We can play with this thing that will make people remember those times from their past,” Strauss said.

So, propelled by this nostalgia, the team came up with their own version with homemade ice cream with Valrhona Manjari single origin chocolate from Madagascar, dusted with toasted almonds and filled with chocolate sauce inside a taco shell made via a pizzelle press. Other taco iterations included a miso-bourbon sauce.

They had the taco on the menu for a short time, but then removed it, knowing they would offer it again at some point in the future.

Flash forward to this week when the end of Choco Taco was announced. Strauss and Bovey began frantically texting each other, discussing how to bring him back. They decided that for the next two weeks, Oy Bar would pay tribute once again, using new flavor combinations.

One version will feature flavors inspired by Mexican hot chocolate like cinnamon and spice, with a buttery candy crunch to resemble cojita cheese, as a nod to life in LA

According to Strauss, the menu presented is “filtered through this experience of living in this city. We all love Los Angeles and the flavors Los Angeles brings.

They also hope to offer an accompanying shot over the two weeks for those who wish to toast the Choco Taco or pour one in remembrance of simpler times.

Recipe blogger Adrianna Adarme from A Cozy Kitchen recently reposted her recipe for Chocolate Tacos — made with a crinkle-fudge no-churn ice cream — that she first released in 2018.

Growing up in Buena Park, she says she regularly enjoyed this tasty treat.

“There was an ice cream truck that was always driving around our neighborhood. My favorite order has always been a Choco Taco,” recalls Adarme.

Inspired by these childhood memories, she set out to create her own. But she also felt compelled to try recipes that might require special equipment as an adult. So in his version, Adarme used a WaffleCone Express to make his waffle discs. (She says you can also use a nonstick skillet to cook your batter.)

I say follow the recipe as closely as you want! Fill the tacos with different ice cream flavors and add different toppings!

Then she removes the disc and uses a thin book wrapped in a paper towel to create the shape of the taco. Adarme encourages those who wish to undertake the task of creating their own to customize it to their liking.

“I added all sorts of different nuts and sprinkles on top. The fun of making something at home is customizing it,” Adarme said.

“I say follow the recipe as closely as you want! Fill the tacos with different flavors of ice cream and add different toppings! »

The idea of ​​personalizing the Choco Taco is a recurring theme in the stories of these makers. Along with these collective memories comes a sense of empowerment for Angelenos, who are undeterred by the fact that they will no longer find Choco Tacos on ice cream trucks and liquor store shelves, and maybe that’s a good thing.

Because while the inexpensive after-school treat after a day of skating is unlike any other, it’s worth considering that we as a culture have evolved far from the 80s when Choco Taco started in the origin.

But it’s hard to deny the cultural significance it holds in the heart of the city, and we fare better; just be sure to take extra towels.