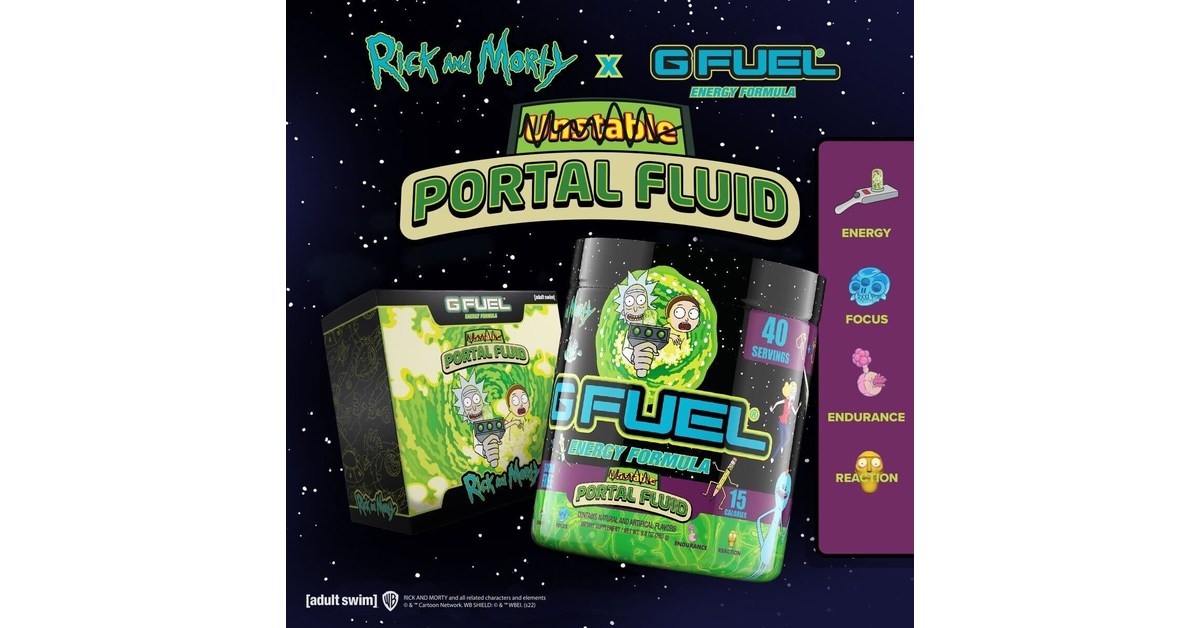 Inside the new G FUEL Unstable Portal Fluid Collector’s Box, you’ll find a 40-serving jar with a full cast of characters from rick and mortyplus a 16oz Shaker Cup featuring our titular duo escaping through a portal to their next exciting adventure!

G FUEL Unstable Portal Fluid is sugar-free and contains antioxidants from 18 different fruit extracts. Each serving is only 15 calories and contains 140 mg of caffeine plus exclusive energy and focus-enhancing complexes.

“No one will ever match the creative genius of Rick Sanchezand you may not be able to travel through our portals, but the flavor scientists at G FUEL have created a wild taste adventure to celebrate rick and morty as it enters its sixth season,” said G FUEL Founder and CEO, Cliff Morgan.

rick and morty is the hit half-hour Emmy-winning animated comedy series on Adult Swim that follows a sociopathic genius scientist who takes his inherently shy grandson on incredibly dangerous adventures across the universe. Rick Sanchez lives with his daughter Beth’s family and constantly takes her, her son-in-law Jerry, her granddaughter Summer, and her grandson Morty on intergalactic escapades.

Seasons 1-5 are now available to stream on HBO Max.

As the official energy drink of Esports®, G FUEL offers gamers a performance-oriented alternative to standard energy drinks. With an ever-expanding line of sugar-free products that includes powdered energy formula, ready-to-drink cans, powdered hydration formula and fizzy hydration bottles, G FUEL has firmly established itself as the leader in the market in the gamer energy drink industry.

Join the movement today at GFUEL.com and follow us on social media @GFuelEnergy.

Warner Bros. Consumer Products (WBCP), which is part of Warner Bros. Discovery Global Brands and Experiences, extends the company’s powerful portfolio of entertainment brands and franchises into the lives of fans around the world. WBCP partners with the best licensees around the world on an award-winning range of toys, fashion, home decor and publishing inspired by Warner Bros. the biggest DC franchises, Wizarding World, Looney Tunes, Hanna-Barbera, Game of Thrones, Cartoon Network and Adult Swim. With innovative global licensing and merchandising programs, retail initiatives and promotional partnerships, WBCP is one of the world’s leading retail licensing and merchandising organizations.

Fall gardening: what to plant in your garden in September