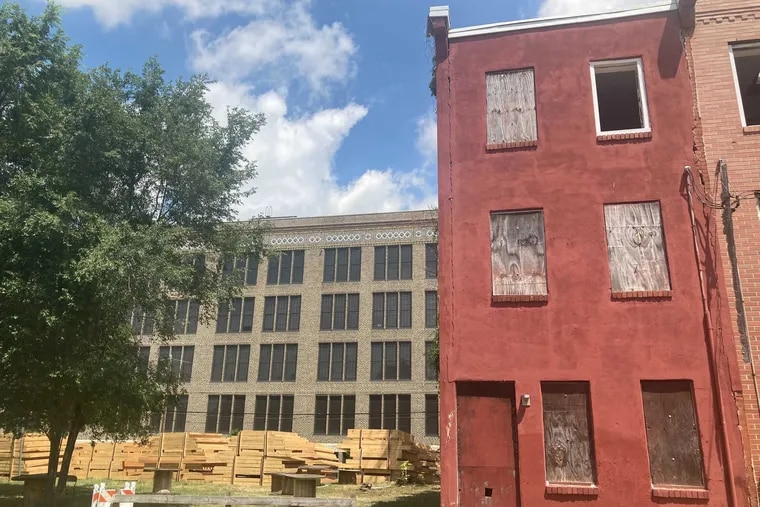 Standing in front of a new supermarket on Ridge Avenue, the first in the neighborhood since the 1960s, Kelvin Jeremiah almost laughed with excitement.

“Our residents here deserve amenities, access to opportunities that we should be providing where they live,” Jeremiah, president and CEO of the Philadelphia Housing Authority, told the crowds that gathered last week for the first day of the new Grocery Outlet. supermarket. “You don’t have to go downtown or Broad Street to get a grocery store. You can walk on it. You deserve it.”

The store is the cornerstone of PHA’s $750 million revitalization effort in the Sharswood neighborhood in North Philadelphia. The project is a throwback to a time when public housing authorities commandeered far more resources and recreated swathes of American cities — for better and for worse.

The plan began with the demolition of two old-fashioned public housing towers in 2016, the relocation of hundreds of tenants and the seizure of 1,300 lots by eminent domain. The ultimate goal is to build and rehabilitate more than 1,200 homes in this long disused corner of North Philadelphia while rejuvenating the adjacent stretch of Ridge Avenue, where the new mall is located.

As Jeremiah and his team take a victory lap after the opening of the Grocery Outlet, it’s worth taking stock of the progress of the project – nearly nine years after PHA first announced major changes for the neighborhood.

“By the end of this year, all 1,200 units will either be completed or under construction,” Jeremiah said. “We are over 50% finished. … This project turned out to be a complete blessing, not only for PHA, but also for transforming this once forgotten part of the city.

Not everyone is so optimistic.

Some blocks where PHA and its partners plan to build are buzzing with activity. A stroll down Master Street in the middle of Thursday afternoon revealed as many construction workers as residents.

Sixty units closer to Ridge Avenue are complete, half of which will first be offered to families in the Blumberg complex, where 446 households have been displaced by the demolition. A renovated historic public high school now houses the Vaux Community Resource Center, which offers education, health care, and workforce development services.

But many lots acquired by PHA by eminent domain are still empty. The site where the two demolished Blumberg public housing towers stood remains a moonscape, although zoning permits are in place for 38 owner-occupied affordable housing units.

Just west, between Jefferson and Oxford streets, nonprofit affordable housing developer Pennrose has yet to build more than 200 units. Pennrose hopes to meet with the community and obtain permits in the fall, then innovate by the end of the year.

According to PHA’s estimate, 309 units have been completed, a quarter of the final goal; 94 are in the remaining elderly-only Blumberg Tower, with displaced people getting the first request. Besides these rehabilitated units, there are 215 new units completed and 275 under construction.

This means that PHA and its partners should innovate in more than 600 homes over the next five months for each unit to start on January 1, 2023, as Jeremiah hopes.

“Having everything under construction by the end of the year doesn’t seem realistic to me,” said Jenna Collins, a community legal services attorney who has followed PHA projects in Sharswood closely. “Given all the challenges facing anyone trying to complete any type of construction project right now, I’m surprised he’s so optimistic.”

Jeremiah said PHA faces the same challenges that all developers face. Supply chain issues have eased in some sectors of the economy, but many building materials, including basics like windows and drywall, are still struggling. Rising interest rates, rising steel and lumber costs, and shortages of construction workers have taken their toll. The supermarket itself was originally scheduled to open last winter.

For Collins, the delay is particularly painful because of all the families who have been moved out of the neighborhood and who have priority over the new units.

“Even though the world had been in pristine condition throughout, this project was very slow,” Collins said. “We are talking about the loss of these units, the displacement of residents from their communities. I’m afraid we’re missing the big picture.

In the narrow townhouse blocks of Harlan, Sharswood and Stewart streets, where the PHA has seized a handful of occupied homes as well as numerous vacant lots, there are signs of activity. Building materials are piled on one of the lots behind the old Reynolds Public Elementary School, preparing for the start of construction. To the south, opposite Vaux, the land has already been cleared.

On Thursday, between the two historic school buildings, local men sat on lawn chairs under a canopy of trees on land owned by the PHA. Although all support the new mall, they are skeptical of the housing authority’s larger project. They knew people who lived on these blocks, or in the towers, and were moved to make way for the project. All these years later, they’re not convinced affordable housing is coming.

“Everybody left, they moved them somewhere,” Mikal Scott said. “They bought them all out. They’ve been gone for four or five years. No one has returned to these houses. This invites squatters, the homeless.

PHA is much more advanced on the non-residential aspects of its plan. In addition to the Vaux Community Resource Center and school, which opened in 2017, PHA unveiled its new headquarters on Ridge Avenue in 2019, moving hundreds of employees out of downtown.

Retail spaces facing the commercial corridor have been difficult to fill during the pandemic, Jeremiah said, and the agency now plans to use at least one of them for community services at the place of private companies.

Then there’s the supermarket, which wins praise even from skeptics like the men who’ve lost land and friends to eminent domain. (It was also the site of an Occupy PHA encampment in 2019 that ended with the agency’s agreement to hand over a handful of vacant homes to activists.) Santander emergency care and bank move into the mall’s other retail spaces. . Another space is reserved for Barkley’s BBQ, a popular store in Strawberry Mansion.

Most importantly, residents of Sharswood are thrilled to have the new grocery store with fresh produce and affordable produce.

For Ha-zel Davis, the new Grocery Outlet means she can save money on car expenses. She used to shop at the Fresh Grocer on Broad Street near the Temple University campus.

“I usually walked and took a cab back,” Davis said, queuing with a pint of blackberries and a cantaloupe. “I think it looks really great here, though. And I walked here; now I can walk home.