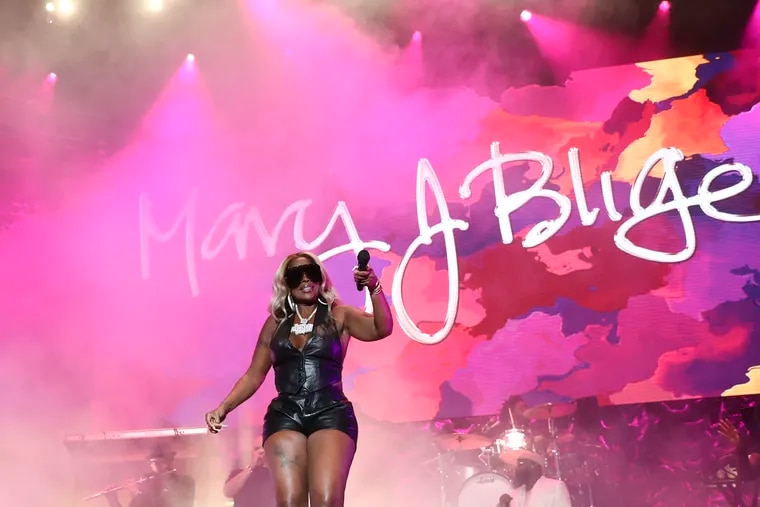 The Roots Picnic made a triumphant return on Saturday, with the Philadelphia hip-hop group drawing their biggest ever crowd as they returned to the Mann Center after a two-year absence for the first of back-to-back celebrations of the black music. and culture in Fairmount Park.

“Philadelphia, get up! Roots rapper Tariq “Black Thought” Trotter commanded the crowd of 30,000, announcing that he and the 10-piece band anchored by drummer Ahmir “Questlove” Thompson were set to be joined by Mary J. Blige in as the co-headliner of the final set. of a day started 10 hours earlier.

Under bright blue skies, the picnic unfolded like a test of musical endurance, with Philadelphia R&B singer Jazmine Sullivan, jazz pianist Robert Glasper with Philly singer Bilal and the band leader of gospel by Camden Tye Tribbett, all delivering outstanding performances, all streamed live on Youtube.

And also Black Thought, a second time: it mainly served as a foil to Blige during his star turn, dropping verses on “What’s the 411? and “Reminisce” as the singer put a heavy punch to deeply felt songs of vulnerability and heartache that the crowd sang along with.

But the Roots rapper also showed off his verbal and rhythmic mastery earlier during a Black Thought Live Mixtape segment that was the pure hip-hop highlight of the day, complete with rat-a-tat musical repartee with rappers Rick Ross and Benny the Butcher, plus surprise guest Pharoahe Monch.

This stellar showcase was sandwiched between Sullivan and Glasper’s sets with Bilal, which were displays of vocal mastery.

Bilal (surname: Oliver) was gloriously flexible in his scat-singing excursions to pianist Glasper’s jazzy explorations, with Roots keyboardist James Poyser seated. Sullivan focused on the sexually candid songs of her 2021 Tales of Heauxand the Strawberry Mansion-raised singer’s voice dipped and soared in moments of great drama and subtle tenderness.

Sullivan was one of many performers to remark with pride and delight being a guest of the Roots and in full view of a predominantly black audience. “I see a lot of beautiful black faces there,” she said. “Lots of beautiful brown skin.” Benny the Butcher said, “I’m from the east side of Buffalo. Believe me, it doesn’t look like that up there.

Long-time visitors to the Mann might wonder how 30,000 people – a number expected to be matched on Sunday when Summer Walker, Wizkid, Kamasi Washington, Tierra Whack and DJ Jazzy Jeff and Rakim are among the performers – could possibly fit into a place whose TD pavilion holds less than half that number.

READ MORE: Who to see at Roots Picnic (besides The Roots and Mary J. Blige)

By enlarging the place so that it triples in size, that’s how it is. Mann’s regular campus spans 22 acres, including the high Skyline stage, which was used on Saturday to pose for a selfie next to a Roots Picnic sign with Center City in the background, as well as for podcasts organized by Philly hip-hop personalities Wallo267 and Gillie Da King.

For the picnic, Mann’s footprint spans more than 65 acres, moving east into Fairmount Park, where Philadelphia singer Aquil Dawud was the opening act at 1 p.m. on the main stage, which stands in an open field that was crowded by the time evening came. .

The new layout transforms the TD Pavilion into a second stage, significantly shorter on must-see acts, although there were a few prime attractions scheduled for Sunday, including maximalist jazz saxophonist Washington, rapper Freddie Gibbs and the band of New Orleans Tank & the Bangas.

The Pavilion was nonetheless an attractive place on a Saturday, in part because it offered two otherwise scarce amenities: shade and seating.

This is where Tribbett played with his energetic 16-piece ensemble. The Grammy-winning bandleader is a good example of what Roots director Shawn Gee says the festival intends to demonstrate that “black culture is not a monolith. It’s a mosaic.

With Kirk Franklin scheduled for Sunday, there’s more praise music at this year’s Roots picnic than ever before, and the crowd responded loudly to Tribbett’s message. He did not specifically mention gun violence, but spoke of “a lot of madness”.

“God can do what we can’t do, but we must do what we can do,” he preached, and raised the roof with an evangelical adaptation of Kendrick Lamar’s “Alright.”

The Picnic’s growth into a major festival that naturally branches out from the Roots’ innate musicality and wide range was evident throughout, with a Tournament of Spades and shorts from the upcoming Blackstar Film Festival.

Perhaps the most winning practical touch of the picnic was a truck that sold fully charged cell phone chargers for $35.

Queues entered the festival grounds for a long time in the afternoon, but the process of checking for prohibited items first – no chairs or backpacks allowed, unless it is whether it was clear bags – then going through the metal detectors was smooth and efficient.

With the growth of the picnic came growing pains. As the day progressed, it became apparent that the sets weren’t starting at the times listed on Roots Picnic’s Instagram or the festival app.

The time intervals between sets were long and the venue was too crowded to move around much, so the best strategy was to stick to one location and listen to DJ Diamond Kuts, the Philadelphia-based co-host of the relaunch of Yo! MTV Raps, which kept the crowd happy by spinning a lot of Beyoncé and Biggie. Yo, give that woman a bonus!

The crowd was more than prepared for the arrival of the headliners when the Roots arrived at 11 p.m., led by Black Thought in a white suit with matching platform sneakers.

The band was on fire from the start, mixing originals with a snippet of Kool & the Gang’s “Jungle Boogie,” but only played for 12 minutes before releasing Blige.

“The Diva Queen”, as Black Thought called her, was in top form and outspoken, and she has an extraordinary connection with her audience, 30 years after her debut.

“Tonight is going to be a history lesson,” she said, expressing her gratitude for performing with “one of the greatest bands in the world, in our culture.” The benefits of the collaboration were many, from the grating beats that enlivened “Reminisce” to Tuba Gooding Jr.’s pumping sousaphone pushing “Real Love” forward.

Blige came out after an upbeat version of his 2007 single “Just Fine”. The tipping point.

It was dazzling, but wrapped up day one of the festival with the band named after it for performing without Blige for just 20 minutes. It made it clear that there is at least one thing the expanded Roots Picnic could use more of: Roots.