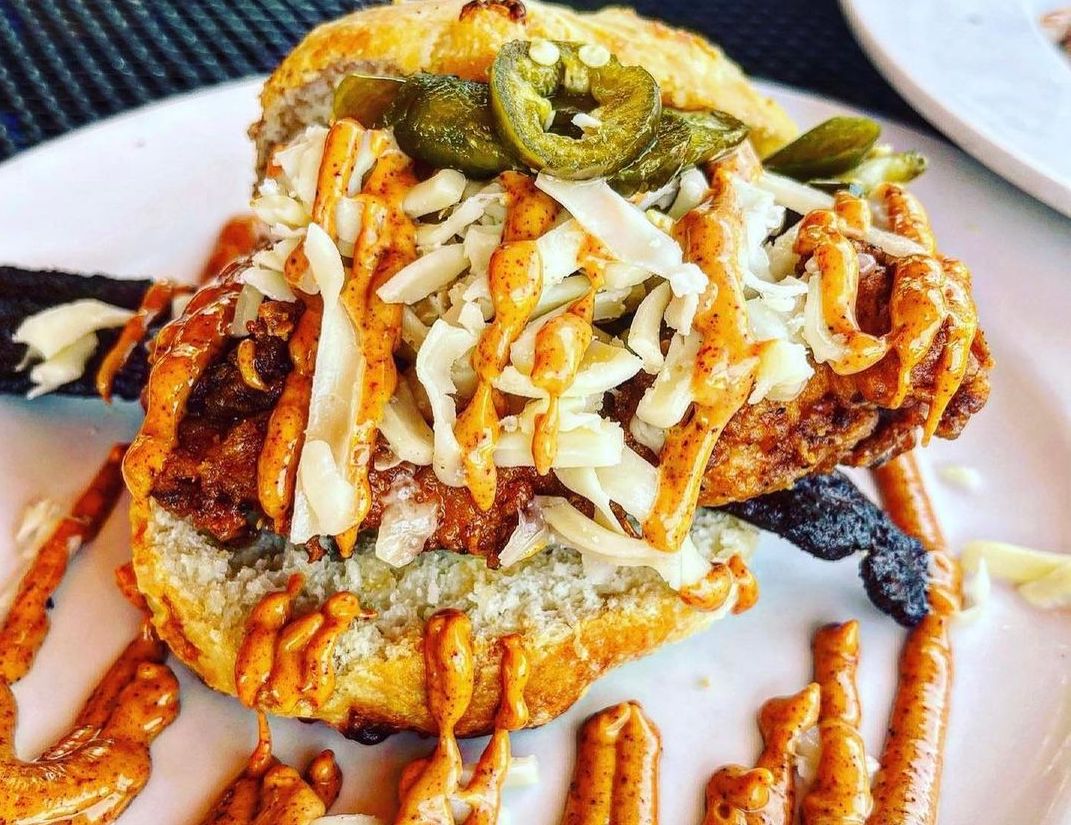 WILMINGTON – It’s been six months of planning for the transformation of the former City Mac store in the Forum into Vicious Biscuit. Much to the delight of Port City brunch lovers, its official Wilmington launch will be unveiled on Monday, July 18.

Vicious Biscuit started in Mt. Pleasant, SC in 2019, founded by Michael Greeley, Josh Lambert and George McLaughlin. It’s known for its inventive, stacked breakfast sandwiches, made with one of its four homemade cookie options: buttermilk, cheddar-jalapeño, sweet potato, and gluten-free.

READ MORE: In other Brews and Bites news

Ball began working with the company in 2020, after spending time with founder McLaughlin leading the McAlister Deli franchises at the turn of the 21st century.

“He invited me to help build this wonderful brand and I gladly accepted,” Ball said. “I couldn’t turn down such an incredible opportunity to help build a brand of this caliber.”

Vicious Biscuit locations produce 500-700 cookies per day, each measuring about “the size of your fist,” Ball explained. Southern rounds have become revered for their crispy exteriors – brushed with butter while baking – and their soft interior.

Popular items on the Vicious menu include The Babe – a buttermilk cookie topped with Vicious candied bacon, smoked pulled pork, barbecue sauces and horseradish, and the company’s homemade Cowboy Candy, tjalapeños marinated in equila made with apple cider and sugar.

There’s also the Fat Boy – buttermilk fried chicken, homemade chili cheese and hot honey – and a shrimp and grits version that uses a cracker as a base.

All locations operate from the same menu, plus there are “build your own” and a la carte options. Ball said plans to start adding more unique bites are in development.

“We have not yet started our research and development program to add new flavors, but will do so next year as we continue to grow.”

Vicious Biscuit opened its second location in Summerville in 2020 with expansion plans, but Covid-19 halted construction. Last month it launched in Charlotte, with Wilmington becoming the store’s number four.

Boone, NC, operations are underway to open by September and thereafter Vicious Biscuit will travel further south to Neptune Beach in Jacksonville, Florida with the goal of opening by December.

The franchise became famous for its butter and jam bar offering fresh spreads to add even more flavor to baked goods. Vicious Biscuit makes its own butter and sources its signature jams from Seaside Grown out of St. Helena, SC Flavors rotate seasonally.

“A new star on the bar is our blueberry and ghost pepper jam,” Ball said of the five or six on offer now. Apple pie, strawberry, blackberry, and peach complement the others, although the latter is soon replaced by peach-hibiscus-habanero.

More than cookies make up the Vicious menu; there are sweet puppies – balls of fried sweet potato dough, drizzled with powdered sugar and served with white chocolate cream – waffles (a variety of sweet potato too) and donuts. Lighter dishes, such as a bowl of oatmeal and an egg white omelet, are also on the menu.

He squeezes fresh orange juice from a Zumex machine into the glass and specializes in Bloody Marys, mimosas and coffee drinks.

Already in its infancy, the restaurant won the Best Biscuit 2021 award according to reader votes from Charleston’s Post and Courier. Ball said it’s because of the flavor, of course, but also because the team brings a memorable experience to “gourmet-focused comfort food,” served with Southern hospitality.

“We’re bringing the excitement back to brunch,” he said.

Located at 1121-A Military Cutoff Rd., Forum Restaurant comfortably seats 140 diners indoors and outdoors under a covered patio. Vicious Biscuit is open Monday through Friday from 7 a.m. to 3 p.m. and Saturday and Sunday from 8 a.m. to 3 p.m.

Want to know more about PCD? Subscribe now, then sign up for our morning newsletter, Wilmington Wire, and get the headlines delivered to your inbox every morning.

Toys ‘R’ Us will be in every Macy’s by Christmas