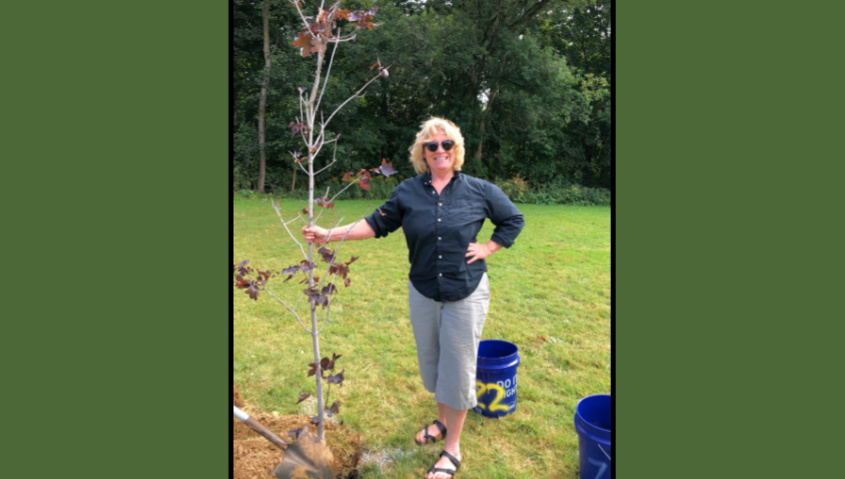 BALLSTON LAKE – The Burnt Hills-Ballston Lake Central School District celebrated the work and retirement of Laura Berry who had worked in the district for 37 years as a teacher, coach and nature lover.

Berry was a physical education teacher. She has also coached college field hockey, softball and basketball and coached modified field hockey. Berry retired last year and the district celebrated by planting a tree earlier this month.

“It’s a great honor,” Berry said. “I never imagined that after being retired for over a year, they would still want to do something in my honor. So that was a real treat. I’m very grateful.

Charlton Heights Elementary School principal Tim Sinnenberg said he wanted to do something to honor Berry for what she has been able to do for the district.

“She really touched thousands of children,” said Charlton Heights Elementary School principal Tim Sinnenberg. “All the kids in the school building go to physical education classes, and she has such a beautiful way of being. She was able to touch so many lives.

Berry is a nature and a master gardener, Sinnenberg said. He explained that the school offers a one-mile course that students take during their physical education class. One of the course markers was once a set of maple trees that were felled in a storm years ago.

“Laura and I were always admiring the tree, in the fall it was so beautiful,” Sinnenberg said. “When it happened, I told Laura how disappointed I was, and I said ‘when you retire one day, I’m going to plant another tree in your honor because you’ve touched so much lives, you love nature and you loved that tree.”

Now, when everyone runs the mile course, they will always remember Laura Berry, Sinnenberg said.

Berry retired last year. The tree planting and ceremony could not take place last year due to restrictions that were still in place, Sinnenberg said.

“We are so lucky this year to be able to bring the whole school together outside and involve our APE and the community,” Sinnenberg said.

The tree was donated by Ryan Cullinan of the Hewitts Garden Center in Glenville, who is the husband of a PTA chair, Sinnenberg said.

“We brought in the entire school, staff and some community members for a full assembly,” Sinnenberg said. “We had speakers who talked about Laura’s contribution to the school. We ended the assembly by asking the children to walk the mile loop in honor of Laura.

The students were so happy to see Berry, Sinnenberg said. In addition to teaching at Charlton Heights Elementary School, Berry also taught at Richard H. O’Rourke Middle School and Stevens Elementary School in the district.

“Once they saw her they came over and hugged her, some of the kids were crying,” Sinnenberg said. “I think it was really special, not just for Laura, but also for the kids, who really missed her and were so happy to see her again.”

Berry started in the district in 1984, she said. The district shared photos of the tree planting on its social media accounts which received dozens of congratulatory comments from families in the district and alumni of its own.

“It came out of nowhere, I got a text from my old colleague Steve Jones, and he was like ‘hey, are you coming next week?'” Berry said. “It was a great day. Everything went well.

Berry loves nature, she says. She explained that she was also a biology student when she went to school.

“I come from a farming background and I love nature,” Berry said. “So part of my work outdoors with the kids was always showing what was going on in nature, what was growing, and what bird was flying over, what the dragonflies were doing. When I left, I actually planted some shrubs near the playground.

Seeing the students and staff members again was the best part of the day the tree was planted, Berry said. She said the last time she saw them before the celebration was when they were all still wearing masks.

Berry uses some of her free time to work with trees, she said. She worked with the town of Guilderland on legislation to protect native trees and plant more trees, she said. Berry encourages everyone to learn more about native plants and the food web.

The new tree will mark the first bend in the mile course for students, Berry said.

After: All news | Saratoga County

More from The Daily Gazette:

Café and antique shop all in one