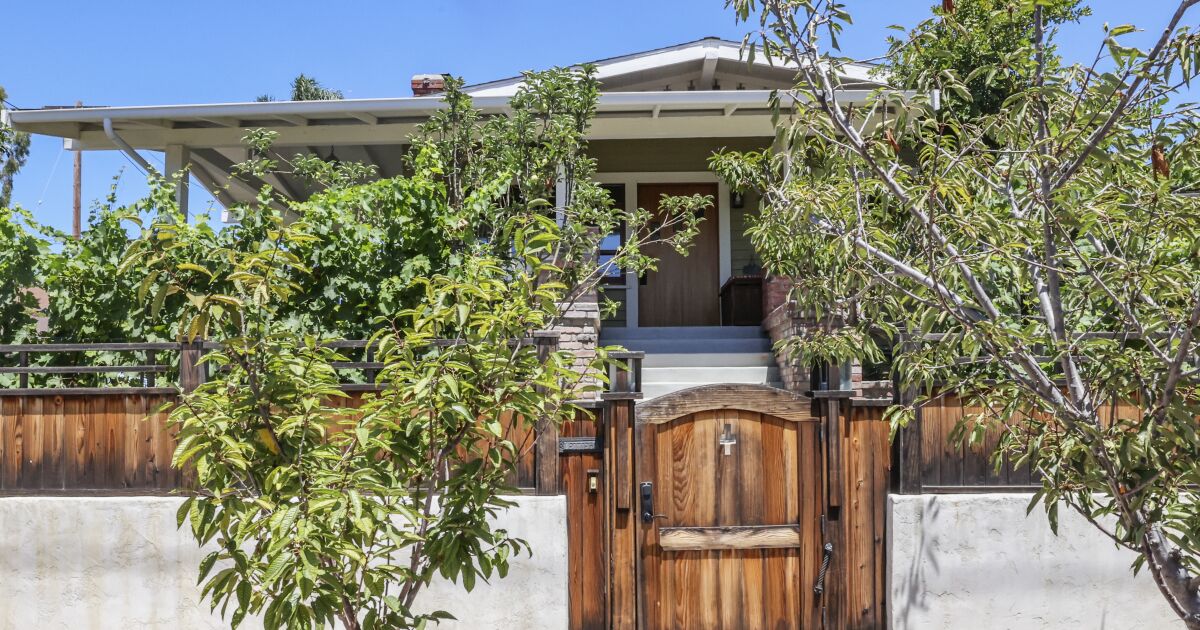 When considering San Diego’s agricultural regions, most people don’t think of Mission Hills, one of the city’s oldest neighborhoods. Yet this year, with a growing passion among locals to grow their own food, the Mission Hills Garden Club made “Homegrown” the theme of its annual Garden Walk in May and recognized some of the many small urban farms in the community.

Among the properties featured was Ed Balsamo’s garden, tucked into a large wooden fence that provides privacy and adds support for fruit, vegetables and espaliered vines. All but a few of his varied plants provide food for his family’s table.

Balsamo caught the gardening bug after buying his first home in 2004 and starting to grow tomatoes. Gradually, he became more interested in gardening.

“Living abroad, especially in Italy, you see things growing all around you. People are using their land to grow food,” he explained.

For the past 20 years, Balsamo, whose father is of Italian descent, and his Italian-born wife, Daniela Vicinanza, have lived alternately in San Diego and Italy with their son and daughter as part of his environmental lawyer assignments for the Navy. His interest in growing food for his family and planting a small family vineyard blossomed with their residence in Italy.

In 2012, when they purchased their 1913 Craftsman Cottage in Mission Hills on a 4,500 square foot corner lot, he knew he had the right space for his miniature farmhouse, one of many dotting the town. Well-established urban community north of Old Town and San Diego Bay.

“When we arrived here it was mostly grass with a driveway and a navel orange tree, plus five rose bushes which I moved and two jasmine bushes planted under what is now our bedroom window,” said declared Balsamo.

He quickly got to work pulling the grass and creating the garden, which now provides around 60-70% of his family’s vegetable needs and 80% of their fruit.

With a corner lot, he was able to line two sidewalks with planters for fruit trees. Among its trees – both along the sidewalk and inside the fenced yard – are navel, Valencian and blood oranges; lime, Meyer and Persian lemons; grapefruit; almond; face; Apple; sin; Pear; and two varieties of cherries, as well as pomegranate, avocado and a banana tree yet to be produced.

Because the land is just over a tenth of an acre, Balsamo used space-saving strategies, using aesthetically pleasing espaliers and pergolas, to elevate his growing space. Its passion fruit vines grow atop the driveway entrance.

The vines are just beginning to produce enough grapes to produce some wine. Last year, his vineyard produced 16 bottles, which Balsamo made in house. He expects his mature vines to produce around 25 bottles.

“My goal was not to be a master winemaker. The idea was to make some simple wine to enjoy with the family, in the European style,” he explains.

One of his big successes is his kiwifruit, which he says are best suited to a hot summer and cold winter climate, but difficult to grow in a coastal environment. After nine years, his four vines (one male and three female) have this year produced 40 to 50 kiwis.

In addition to fruit trees — he also grows strawberries on the vines — Balsamo has a good crop of vegetables, which vary by season.

“We try to eat seasonally,” he said.

“My wife, who loves to cook, has a passion for pizza. We have a Neapolitan style pizza oven (on deck). We entertain with pizza nights, using the vegetables as toppings,” he said.

Balsamo’s initial focus was on the garden, but once the couple returned from their last tour of Italy, he and Vicinanza turned their attention to the home. They expanded it from its original two bedrooms and one bathroom to five bedrooms and three bathrooms, so that their now 12-year-old son and now 10-year-old daughter can each have their own room, with two guest rooms available for families visiting from Italy.

The couple also restored the house to its original handcrafted configuration and opened up the wrap-around porch, closed by the previous owners probably in the 1960s or 1970s. They added a basement for winemaking/wine storage to the suitable cooler temperature, as well as square footage in the back to accommodate a larger indoor kitchen and a deck where there is an outdoor kitchen, pizza oven and dining table.

“We wanted to keep the single-story line of sight and added the basement, with a wine cellar and bedrooms, to keep the look of the Craftsman home,” he said. The restoration took about a year and a half and was completed just before the pandemic hit.

For their restoration, the couple received the Carl and Betty Hauck Award “in recognition of exemplary restoration of their home” and “for outstanding leadership in preserving and protecting the character and charm of Mission Hills” by the organization Mission Hills Heritage in 2021. .

While the restoration of the house and garden required considerable work, the benefits are obvious. They now have a home that meets their family’s needs and a garden that feeds them and their spirits.

“Once you start doing it and realize you enjoy it, it’s not a burden. It is also a source of relaxation and an escape from work stress,” Balsamo said. “There is a feedback loop. You put in the effort and then get the rewards.