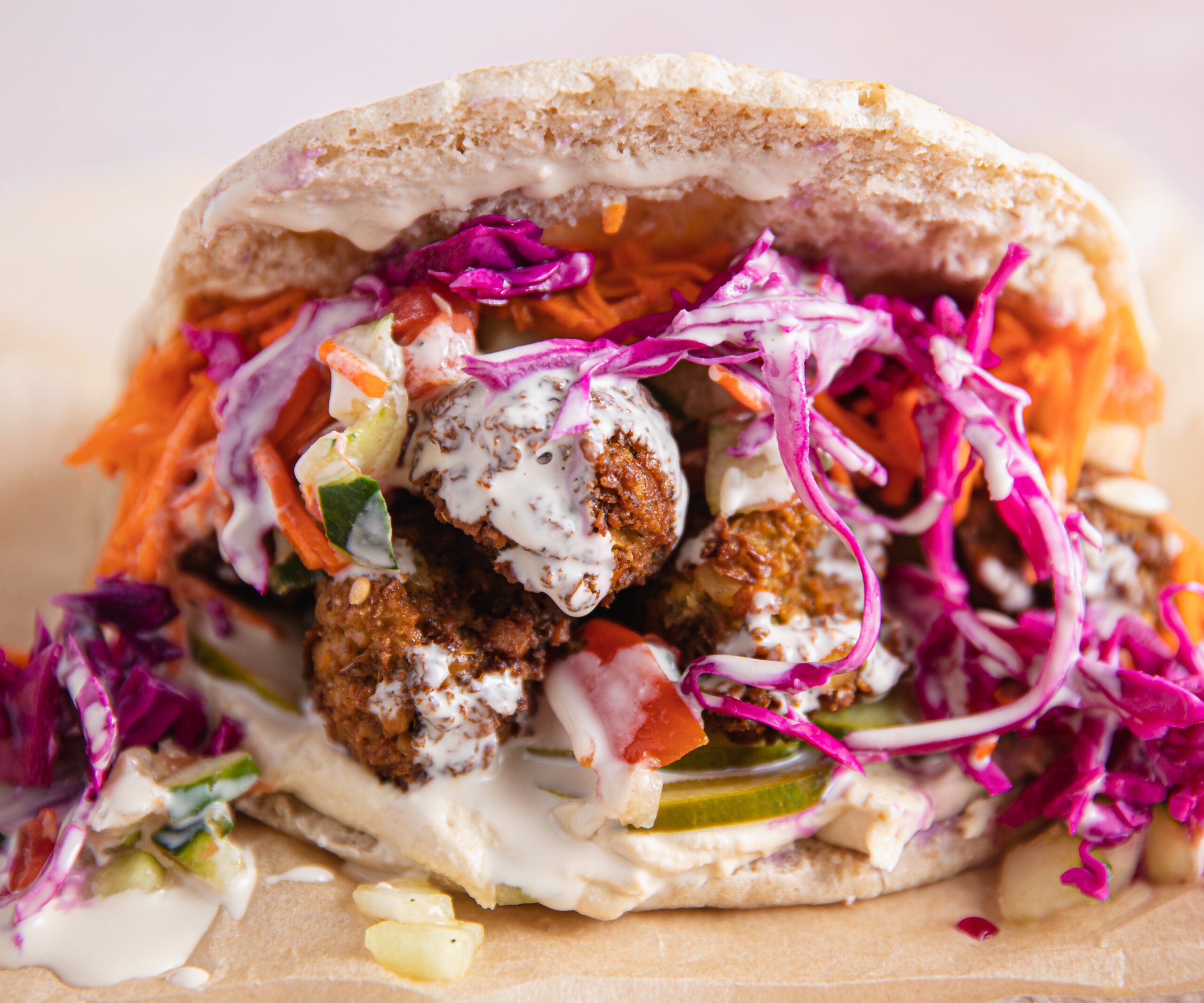 The movement to eat less meat in your diet has taken hold in Boston, with many restaurants offering plant-based dishes. There are a number of benefits to consuming fewer animal products, for environmental, health and ethical reasons. November being World Vegan Month, we wanted to find the vegan or plant-based dishes that Boston.com readers enjoy the most.

There has been global interest in plant-based diets, with WGBH reporting last January that the movement is “having a moment”, with more plant-based options available in grocery stores, restaurants and grocery chains. fast food. Ayr Muir, founder and CEO of Clover Food Lab, said he attributes the growth to increased awareness, as well as the availability of delicious food options.

“Have we made the kind of change that would benefit us all? Not yet,” Muir said. “We are quite far from that. But it’s a pretty powerful moment. It feels like there are a lot of changes happening, and a lot more people who are used to a meat and potato diet are eager to try different things and maybe learn about a vegetable they don’t know the name of.

There are several ways to follow a plant-based diet, which we’ve defined as emphasizing foods that come primarily from plants. This type of diet is the least restrictive, which means it does not necessarily eliminate the consumption of animal products. Vegetarian diets can be varied, but generally involve giving up meat, poultry, and fish, and may allow for the consumption of other animal products like dairy and eggs. A vegan diet consists of only plant-based foods and excludes eating anything that comes from animals.

We asked readers where they go for their favorite vegan or plant-based dishes, and received nearly 300 responses. Clover Food Lab was readers’ top pick, receiving 19% of the vote.

Below, find a reader-recommended guide to restaurants that offer the best plant-based dishes, including a full list and map of all the recommendations.

A 🏆 means a restaurant was in the top 5 in 2021 and 2022. Top restaurants are also scored for how each defines themselves as serving vegetarian (🌱), or vegan (🌱🌱) dishes.

This “forward-thinking” chain of cafes offers vibrant meals, smoothies and juices aimed at restoring customers and nurturing their love of life. While the meals are all vegetarian, Anna Tou, vice president of marketing at Life Alive, said the restaurant aims to appeal to everyone, even meat eaters. Breakfast items, cereals, ramen, acai bowls, and cold-pressed juices are all on the menu. Readers said they come for the spicy peanut noodles and dishes like the Adventurer Bowl, which is served with beetroot, broccoli and kale. Tilda from Arlington said she loves the “Green Goddess Bowl – it has it all: green vegetables, warm lemon garlic brown rice, avocado and a delicious soy sauce dressing. Ginger tamari The presentation is delicious, eat in or take out This bowl makes me happy to be alive Life Alive received 8.4% of the vote.

Classic American restaurant in Central Square, Veggie Galaxy, which collected 11% of the votes, revisits traditional comfort food: everything on the menu is vegetarian, and can even be made vegan (🌱🌱). Readers say they enjoy the waffles, while enjoying Reuben sandwiches and mac and cheese bites. The nachos and vegan mozzarella sticks were also recommended, as was the “Blue Plate Special,” which is currently a Moistmaker sandwich, made with leftovers from Thanksgiving. Mitch from Dorchester said: “I usually order the Great Galaxy Sandwich, the buffalo tenders and the club sandwich, not all at once (but maybe sometimes all at once). Veggie Galaxy has a way of making really indulgent, vegan meals: everything has a ton of flavor, [is] sometimes messy, and [is] affordable and accessible.

Offering all-vegan culinary options, Lulu Green uses organic and fresh ingredients to produce pastries, breakfast and lunch dishes, and juices. They got 11.4% of the vote for their healthy offerings. Readers raved about the shawarma sandwich, made with seitan, pickled turnips and lemony tahini on a homemade pita. They also highlighted the avocado toast and yuca fries. Smoothies include the Namaste on Vacay, which has tropical flavors of coconut and Thai pineapple, and the Over Achiever, made with kale, spinach, mango, strawberry, and more. South Boston reader Brian S. said, “It’s all about brunch! They have the best “brunch sandwich”, cinnamon rolls, vegan omelette and espresso drinks with homemade syrups. The baristas also said the cocktails would be arriving soon. We love this place!”

An upmarket fine dining establishment in Somerville’s Teele Square, True Bistro, which won 18% of the vote, offers vegan cuisine inspired by different parts of the world. Chef and co-owner Stuart Reiter has lived abroad in many countries, and the cuisine draws inspiration from Africa, Latin America and parts of Europe, among others, according to general manager Carlos Camerana. While the menu changes frequently, Camarena said the black-eyed red peas and Thai red curry and rice cake are popular items. “Each person [working] at the restaurant is vegan,” he said. “It’s easier to work with these people, so we can all ‘save the planet’ and fight for animal rights. Even clients know about these ideas and they love it.

Lilly de Somerville said: “One of my favorites from the dinner menu is the crispy oyster mushroom appetizer – they are absolutely delicious and complement any main course. For brunch, I love ordering the tofu scramble and a scone for dessert to satisfy my sweet tooth (scones vary in flavor by month but consistently perfect). Something special about True Bistro is that there’s something on the menu for everyone, whether you’ve been vegan for decades or are new to the idea of ​​plant-based food. .

The Clover vegetarian empire has 15 restaurants in the Boston area, aiming to make customers dream of meatless dishes and hoping to one day be as big as McDonald’s, according to their website. Customers visit the ever-popular chickpea fritter, Brussels sprout sandwich, and sweet potato breakfast sandwich. The local chain, which got 19% of the vote, recently opened an Assembly Row location that boasts the company’s first-ever grocery store, selling products like hummus, coffee beans and meal boxes. Founder and CEO Ayr Muir told Boston.com that his hope is not necessarily to target people who are already vegetarian or vegan, but to reach out to meat eaters and encourage them to explore a different diet.

“Nine out of ten customers who eat at Clover are neither vegetarians nor vegans, they eat meat,” Muir said. “When I feed someone who is already vegan a Clover meal, I have zero impact on the environment because they wouldn’t be eating meat anyway. But if I feed someone who likes to eat meat, and they walk past a Chipotle or Sweetgreen and they don’t have chicken salad… I create a really big environmental impact. He added: “I think we’re going to get to a place in the future where I could offer a vegan-only menu and have the same stats, but today I don’t think that would be the case.”

South End reader Alyssa said: ‘The chickpea fritter pita sandwich is one of the only dishes I can repeat and never tire of. [of]. It’s vibrant, with different flavors of pickled vegetables, crispy donuts, creamy hummus and tahini. I couldn’t ask for more!”

Littleburg: This Somerville spot, which started as a pop-up, serves Mediterranean and vegan cuisine, inspired by flavors from Greece, Turkey, Morocco, Israel and beyond. Readers were clamoring for the gyros, made with seitan or oyster mushrooms and Portobello mushrooms, as well as the pide, a stuffed flatbread. 5 Sanborn Ct., Somerville 🌱🌱

Readers say: “Their yuba breakfast sandwich is the best sandwich I have ever eaten in my life. Period. The yuba is similar in texture to scrambled eggs, but with grilled char on top, then a thinly sliced ​​roast potato, some kind of heavenly creamy sauce, fresh herbs, and a homemade black sesame bun. You’ll want one every day. -Amory S., Quincy

Readers say: “If you’re looking for an affordable plant-based meal, I can’t recommend this place highly enough. The cashew cheese on their nachos is creamy and fabulous; I highly recommend you try them the first time you visit. For tacos, my favorite is their crispy fried tofu and al pastor lentil tacos. – Britani H.

All the best places to get a plant-based dish, according to Boston.com readers:

Want to explore Pendleton Heights? Get started with this beginner’s guide to…