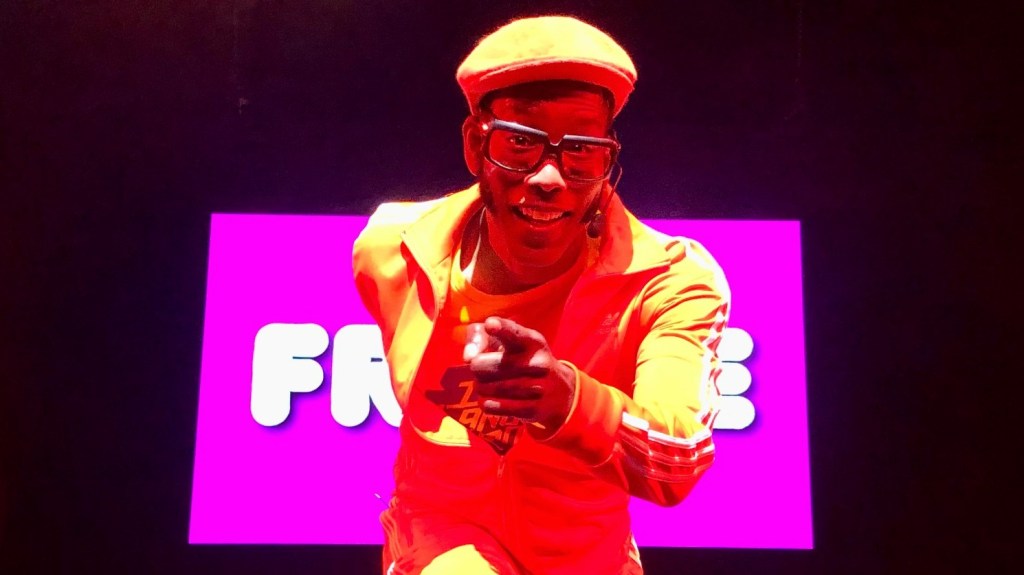 A pair of new kids’ shows at Knott’s Berry Farm from “Yo Gabba Gabba” star DJ Lance Rock have the power to unleash a kids’ mosh pit filled with cartwheels, somersaults, back flips and movements of a crowd of teenagers ready to dance and have fun.

Children’s TV star Nick Jr. will host two children’s shows on select dates from May 21 through September 5 at the Walter Knott Theater in Buena Park Theme Park. Knott’s hosted a media preview of the twin shows on Thursday, May 19 with DJ Lance dancing, jumping, hopping, spinning and walking until he was out of breath.

SEE ALSO: Knott’s Summer Nights kicks off the party with a food festival and live music later this month

Knott’s new shows are filled with the energy and eccentricity of “Yo Gabba Gabba” star, Los Angeles-based musician, DJ and actor Lance Robertson – better known as DJ Lance Rock, who hosted the Emmy-winning children’s television series on Nickelodeon from 2007 to 2015.

“Let’s Play” is set in DJ Lance Rock’s apartment as he imagines a fun imaginative world on a rainy day. “Everybody Dance” finds DJ Lance singing and dancing in his neighborhood while encouraging the audience to stay active during the interactive show.

DJ Lance Rock’s twin gigs at Knott’s feel like watching a young music festival crowd – Kidchella, let’s call it – with the disc jockey pumping the crowd to go wild and wild. Only in this case, the happy and euphoric public is a group of children from 2 to 12 years old who do not need much encouragement.

Knott’s animation team did a great job dressing the theater’s proscenium in bright oranges, pinks, and purples that capture the unbridled joy of DJ Lance’s days on “Yo Gabba Gabba.” A dozen spotlight-lit disco balls send the message that it’s a party and you’re expected to hit the dance floor.

DJ Lance walked through the two shows back-to-back during the media preview with around 100 children and their parents in attendance – in a theater designed to seat 20 times as many people. It’s amazing to think how much youthful energy could be unleashed if the Walter Knott Theater was filled to even half capacity with every DJ Lance Rock show.

The “Let’s Play” show begins with a video of DJ Lance walking through an empty Knott’s Berry Farm past Boot Hill Cemetery, the Calico Saloon and the Charleston Circle fountain before heading into the theater to make his real-world appearance.

The two shows share about a third of their material – including applause, Simon Says, and red light and green light shows. Variations feature educational messages about cleaning your room, sharing with friends, and the importance of reading. Short animated clips about things like being afraid to ride a roller coaster serve as downtimes in the show that allow kids to catch their breath and get ready for the next aerobic workout.

Each show ends with a burst of bubbles – and, of course, more music, dancing and high fives from DJ Lance.

If you don’t know who DJ Lance Rock is then this isn’t the show for you. It’s not a rave-type DJ set that you’ll find at Coachella. This is a slightly unhinged and completely uninhibited children’s television show brought to life on stage, designed to help preschoolers and elementary school students burn off excess energy during the day at Knott’s. Think of it as rainy indoor recreation in a cramped sophomore classroom and you’ll get the idea.

DJ Lance’s shows are aimed at a very targeted audience of tweens. But Knott’s knows there are plenty of satellite fan groups surrounding that core demographic who will also enjoy the show. Children who grew up watching “Yo Gabba Gabba” ten years ago will enjoy reliving their childhood. And then there are the legions of parents who watched the show with their kids — back then on Nick Jr. or now on streaming services.

Apple TV+ is planning 20 new episodes of “Yo Gabba Gabba” based on the former Nickelodeon show to accompany the 66-episode library of Nick Jr. original series available on the streaming service.

The main problem with the DJ Lance Rock show at Knott’s is that much of the performance takes place on a trio of video screens in the theater – leaving the stage dark most of the time. The simple yet engaging video segments with costumed monsters, fuzzy puppets, and lip-synced musicians could just as easily have been done with a cast of performers live on stage. What’s the point of watching TV while you’re sitting in a theme park theater?

This live-vs.-video question can only be a problem for halfway wandering Knott visitors curious about the new show at the Walter Knott Theater. The whirling and twirling kids in the mosh pit at the front of the stage didn’t care if the performers were in the theater or on the big screen. They just want to dance. And DJ Lance gives them permission to kick up their heels and go crazy.

How I use vouchers to save money on the grocery store